(Please note: My review for the eleventh book of my challenge, Curses: A F***ed Up Fairy Tale by J.A. Kazimer, will be posted on my friend Sara’s blog on June 12th.) 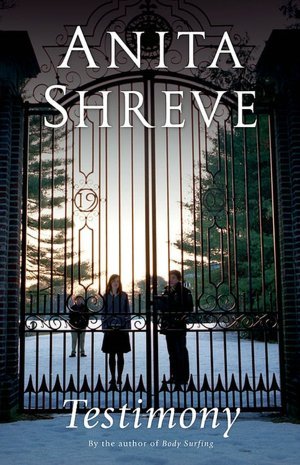 Taken from Goodreads: “At a New England boarding school, a sex scandal is about to break. Even more shocking than the sexual acts themselves is the fact that they were caught on videotape. A Pandora’s box of revelations, the tape triggers a chorus of voices–those of the men, women, teenagers, and parents involved in the scandal–that details the ways in which lives can be derailed or destroyed in one foolish moment.”

I really struggled with how to rate this book. I came across it when I searched Anita Shreve’s name — having previously read her novel The Pilot’s Wife — and saw that it had decent reviews. The plot immediately struck me as having potential, but less than halfway through the book my interest started waning. There were simply too many voices, too many tenses, for me to stay focused without getting completely annoyed every time the narration shifted. I found myself skipping ahead more than once to see how many pages were left in a chapter, and more than once rolled my eyes while reading. There are 21 characters, some appearing only once, many whose chapters do little to advance the plot, but do further what is apparently Ms. Shreve’s diatribe against alcohol. Any parent with teenagers and any teenager his or herself is fully aware of what can happen in a state of extreme inebriation. But Testimony seems to be exactly that — a testimony against the evils of alcohol without sufficient investigation into more of the whys behind what happened that night.

Another one of my issues with this book is that I correctly guessed a huge plot twist that occurs about halfway through the novel within the first couple of chapters. Call it cynicism if you will, but I’d be hard pressed to admit the least amount of surprise when the twist was revealed. It was simply a matter of when, which, had some of the less important chapters been eliminated, would have and should have occurred earlier. The novel clocks in at 305 pages, but I can say without exaggeration that at least half of those pages were unnecessary.

As I mentioned, there are 21 characters whose stories are told, taking an odd combination of first, second, and third person narration in both the past and present tense. How and why some characters were deemed important while others, such as the headmaster’s wife, are not heard from at all, is beyond me. One particular irritation with the voice and tense switching was the use of the second person, present tense in Ellen’s chapters. Ellen is the mother of one of the boys involved in the incident, and her chapters, four altogether, annoyed me to no end. Where I wanted to sympathize with her, I could only sigh and curse Shreve for not choosing to write those chapters in the first or third person.

Shreve’s language in some places confused me to no end. The novel takes place in Vermont, so some of her choices I can only assume are supposed to replicate the way someone from a small town in the Green Mountain State would talk (even though Shreve herself is from Dedham, which is just outside of Boston, and about 20 minutes from my neighborhood), but it just seemed odd to me. Some examples: “The whole thing just frosted Matthew’s ass,” “he could just spit nails,” “he was fed to the teeth with lawyers.” Also, in the headmaster of Avery Academy Mike Bordwin’s chapters, Shreve has an excessive amount of parentheticals that are absent in the rest of the chapters. Maybe this is a bit of a nitpick, but after his third chapter or so, the numerous asides were so glaringly blatant that I found myself skipping over a lot of them out of frustration.

Overall, in a novel with more characters than you can shake a stick at, the only one I felt particularly sympathetic toward was Noelle, who was the girlfriend of one of the boys involved. Noelle was one of the few true victims in the entire incident, and she had no idea why everything went down the way it did. For that, I felt sorry for her. But, and here is where I must echo a sentiment I made in my review for Little Bee, the fact that out of 21 characters, I only sympathized for one strikes me an enormous flaw. This book could have been good — maybe even great –, but instead it was tedious, with no resolution and no lessons learned on any of the characters’ parts. The failed realization of the potential that had made me want to read this book in the first place seems to me more of a tragedy than everything that transpired in the aftermath of the sex scandal.

Date started: August 10, 2012 Date finished: August 19, 2012 The Imperfectionists tells the stories of the employees of an English-language international newspaper based in Italy. My rating: 3/10 The