Writing Wednesday – What it Means to be a Writer 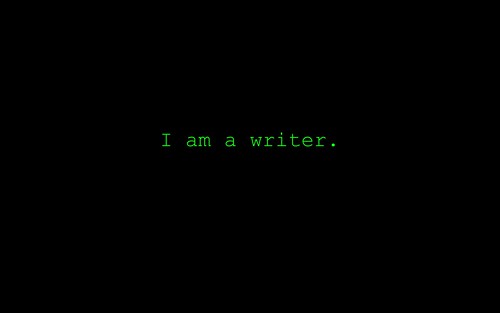 For as long as I have been a writer, I’ve never had a writing routine. Nor have I ever committed to writing everyday (save for my 30/30 poetry challenge back in January). Life always seems to get in the way, and by the end of the day, I have so many ideas or thoughts I wish I had written down. I know I failed on my blogging challenge from a couple of months ago, but I’m hoping that I can commit to at least five days a week, if not the entire week, even if I don’t label it a “challenge” (because then that would mean I’m doing a 365/365, and that, my friends, is sheer madness).

I’ve considered myself a writer since 6th grade, when I won the first and only essay contest I’ve ever entered. From there, my writing expanded into short stories, poems, and in college, articles. I’ve explored so many different styles of writing in the last decade or so that if you were to ask me what my style was, I wouldn’t be able to give you a fixed answer. But I think that’s part of what it means to be a writer. It’s all about exploration. Which brings me to this quote by E.L. Doctorow:

“Writing is an exploration. You start from nothing and learn as you go.”

This has been true of everything I’ve written. With poems, I learn about emotions and thoughts I didn’t know I had. With articles, I learn about whatever subject I’m writing about. When I used to write short stories, I learned about character and plot development, among other things.

In the time I’ve been writing, I’ve often hoped that something — a poem, article, or what have you — would make a difference in my readers’ lives. I’ve come to learn that while this is a hope many writers have, it shouldn’t be the end goal every time pen is put to paper or fingers to keyboard. When writing, we should be hoping to make a difference in our own lives — whether it is discovering something new, or performing self-therapy.

This brings me to another point. Those of you who have seen “Sister Act 2” might recognize this:

“If when you wake up in the morning, you can think of nothing but writing, then you’re a writer.” – Rainer Maria Rilke

If your first thought when you open your eyes is “I have to write…” or “I’ve got a great idea for a poem/story/novel…,” you know what that means.

You’re a writer. So go write something.

I’ve noticed something interesting in the last couple of months. A number of my friends and acquaintances — particularly people I’ve met in college and at the NABJ convention last

I’ve been with Demand Studios for about a year now and, even though I haven’t been writing consistently, I know that with more time and effort, I could make a